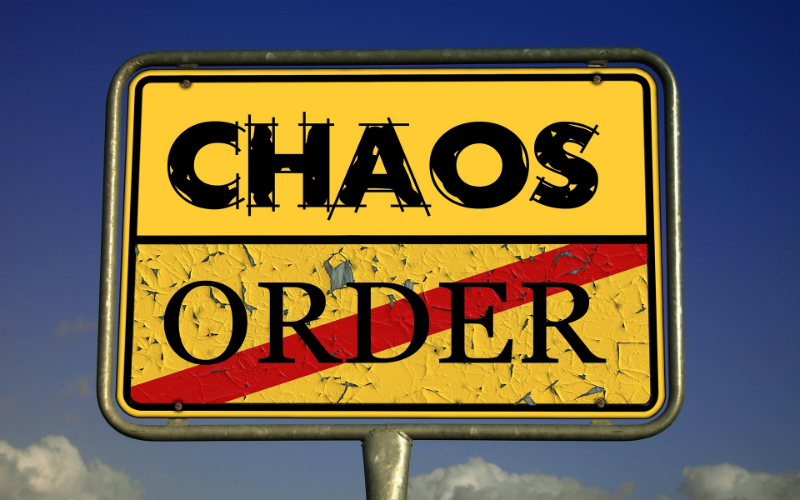 Dear Family of St John’sI am a big fan of programs that talk about decluttering and installing organisation systems.  I am addicted to The Home Edit (Google it!).  They organise pantries and wardrobes, office space and garages, and everything in between.  This is often done in colour order, according to the rainbow! So, your children’s bookshelf would be organised with all the books in colour order – it looks beautiful! However, I have never been able to put these principles into practice or maintain those systems for any length of time.  If you were to look at my desk, the word that might come to mind could legitimately be ‘chaos’. I know where everything is, but it’s not always orderly.  In fact, it’s seldom orderly!The one place where I am organised, is in my One Drive filing.  I have multiple folders and sub-folders and have a document naming system that is mostly foolproof.  I love having quick access to any document I need wherever I am. I even have all my recipes saved online, it’s wonderful being able to access them when shopping.  I appreciate organisation, structure, and systems that work.  I like to know that if something isn’t working, where to go to fix it, what the next steps are.  I think it would be fair to say that most of us want that, to some degree or other. I know I certainly want that when I look around at our city.  When I see potholes and water leaks, no street signs or road markings, streetlights that don’t work – it leaves me with a mix of emotions. Frustration, anger, hopelessness, despair.  Do you feel the same? Does it look like chaos to you too?Well, I have had occasion to be part of two independent meetings in the last few weeks which have given me some hope.  It’s given me a glimpse of some organisation happening within the chaos.  And, this organisation is happening at a church level. Hallelujah!I thought you might like to share in that hope with me, to be a part of bringing some organisation to the seeming chaos. The first meeting I attended introduced an initiative that aims to link church leaders in each municipal ward with their Ward Councillor.  The purpose is to encourage our community members to become ‘spotters’.  Spotters will keep an eye out for the things that are broken or not working and report them.  This reporting can happen via the NMBM App.  Did you know they have an App?  Look on the Play Store. Alternatively, report it to the relevant emergency number.  Or, if you’re not having any success, report it to your Ward Councillor and hold them responsible for taking action. Attendees at that meeting expressed concern whether those who are paid to make sure that potholes are fixed, and streetlights are working are held accountable. Why should we be doing their work? And that’s a valid question. We should hold them accountable.  But, I also feel that we can each play our part to stop our city falling apart – to bring some order to the chaos in our little space.   Here’s a simple example of how St John’s already does this.  We’ve committed to doing regular clean-ups of our block. We’ve already done that twice this year, collecting many bags of litter.  We could argue quite easily that it’s not our responsibility to pick up the litter.  But, those who took part are making a difference.  In my mind, that’s more important than arguing about who should do it, and in the end nobody does it!The second meeting I attended was organised by the Walmer Police Station.  They invited all the church leaders from their sector to attend.  This has also been done in other sectors across the city. They are wanting to strengthen the relationships with the churches and acknowledge how important the role of the church is in maintaining stability and providing resources. The term they’re using is Spiritual Crime Prevention.  What a wonderful meeting this was! Not only to hear that we are needed, and our prayers appreciated. But to see how the churches are once again drawing together to make a difference in our community. Churches are providing a support structure to SAPS and to each other, to help the community.  Isn’t that great?The question is often asked, “Where is the church?” when discussing taking a stand or being involved in society.  Well, the church has an important role to play in bringing some order to the chaos we see around us.  St John’s as a church needs to play its part.  But each one of us, individually, is the church! We each have a role to play.  So, when you see a water leak, or a streetlight not working, when you see a pothole – report it.  Don’t think ‘someone else will do it’, ‘there’s no point, nothing will be done’. If we do our little bit, report the issues, get the reference numbers, involve our Ward Councillors, we will see change. We can also help in committing to praying for the members of our police service.  The challenges they face are enormous. They are exposed to the horrors of society and expected to keep going.  They need our prayers and support. What about saying a prayer for them, and our security companies, every time you see a police officer, security guard or one of their vehicles? I really believe that if we each commit to these initiatives in our own small way, we can make a difference.  We can help to bring order to the chaos. With God’s help, we can.  With loveYour friend and rector,Claire

No comments to show.